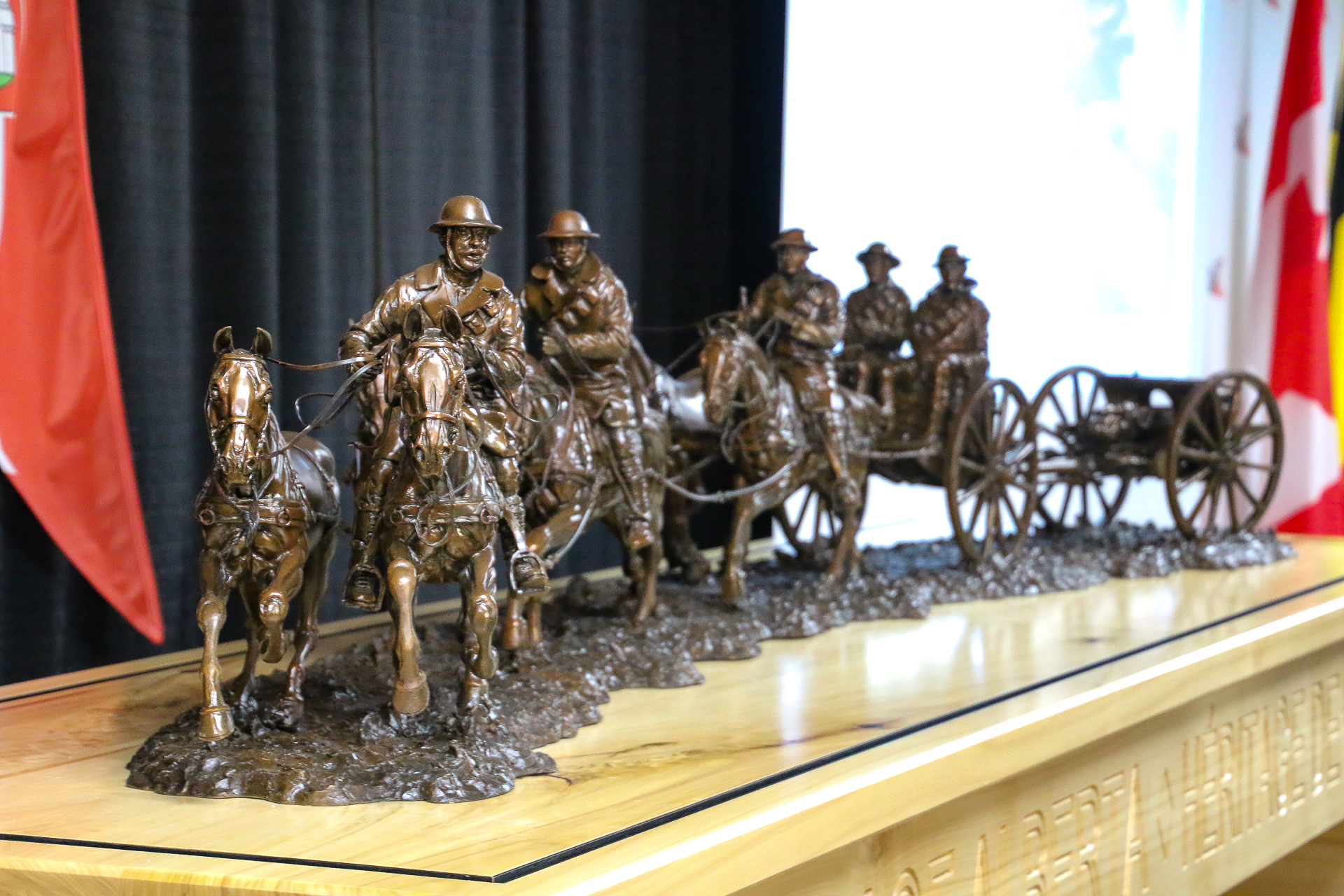 This statue is modelled after the last gun, Mons Gun, to fire in WWI from the Lethbridge 39th Battery, and depicts a gun detachment of six horses and their riders towing a carriage and 18 pound field gun as used by the 20th, 39th, 61st and 78th Batteries of Lethbridge. “This project celebrates the rich Alberta artillery heritage and, in doing so, honours the service, commitment and sacrifice of the Gunners throughout Alberta. The statue tributes their contributions to Canada, and ensure their stories live on through time,” says Glenn Miller, President, Lethbridge United Services Institute.

The statue will be permanently installed at Lethbridge & District Exhibition’s venue to recognize the Artillery units which first trained on the grounds. “Lethbridge & District Exhibition is proud to honour our historic roots that span over 124 years to our unique history with the armed forces,” explains Mike Warkentin, Chief Executive Officer, Lethbridge & District Exhibition. “Our soil was originally home to the artillery during summer training before the Great War, and was activated as a staging area for the units which travelled overseas in both world wars. As we approach our 125th anniversary, we welcome Legacy of Alberta to its rightful home. We invite the community and all guests to our venue to experience this incredible work of art which celebrates our cultural significance in Canadian history in continued support of the men and women of the armed forces.”

The Lethbridge United Services Institute wishes to extend thanks to the supporters, donors and sponsors who have brought this project to life. It would not have been possible without contributions from the Veteran Affairs Commemorative Partnership Program, Government of Alberta Community Initiative Program, Legion Poppy Fund, County of Lethbridge, Kruse Glass, National Salvage and the Bearded Ox as they all worked though the challenges of the COVID-19 pandemic.

The essence of this statue represents the heroic contributions which were made by all Gunners of Alberta. It commemorates the first truly Alberta Battery raised by Major John Stewart, the father of Artillery in Alberta, and those who he recruited from Edmonton, Calgary and Lethbridge, to form the 20th Battery, and whom still reside in Lethbridge today.

In 1908, soldiers in Lethbridge under the command of then Major Stewart began serving the guns. The legacy of soldier and horse working as a team to move the guns into action is immortalized by the beautiful bronze crafted by Don Toney. “This important piece of art will help the community remember the sacrifice and gallantry of our gunners. As Commanding Officer of the Unit Brigadier General Stewart founded, I am honoured to have it now on display and its importance to the 20th Independent Field Battery,” says Major Robert Mein Commanding Officer 20th Independent Field Battery.

While our community is marked with many memorials on rocks or plaques using words to indicate historical events and activities, this memorial will provide the community with a fitting tribute that is fully representative in showcasing the birthplace and accomplishments of the Artillery raised from Lethbridge. “It will provide opportunities to bring new stories to life and share them globally through technology,” says Miller.